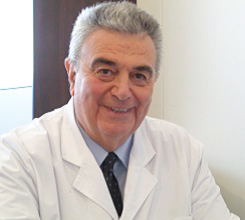 Graduated in Medicine and Surgery (1976) at the University of Pavia, he specialized in Anesthesiology and Reanimation (1979) and in Science of Nutrition (1982) at the same University. He was involved in Reanimation, clinical nutrition and organ transplantation from 1979 to 2016 at the San Matteo Polyclinic, IRCCS Foundation, where he directed, until 2016, the Donation and Transplant Coordination Center of the Province of Pavia.

He has been Professor of Transplantation at the University of Pavia. He was among the founders and president of the Italian Society of Transplant Management Medicine (SIMGeT).

He is a member of the Italian Society of Human Nutrition (SINU). He conceived, founded (2001) and directed (2001-2009) the Italian gastronomic guide "La Gola in tasca". He writes about food and life and - from time to time - publishes, sometimes with heteronymity.
See also

Autoimmune diseases & Metabolomic Analysis Result presentation of 40.000 cases at the Tokyo international congress of Rural Medicine.
Do you have questions about Metabolomics? Contact Us
© 2022 Metabolomic Medicine. All Rights Reserved.  Cookies Policy  Privacy Notice
Design & Developed by